From Launching a High School Solar Training Program to Serving on a Solar Industry Board: A Solar Ambassador Alumni’s Story

Laura Rigell was a RE-volv Solar Ambassador and member of Serenity Soular, who worked to bring solar to two nonprofits in North Philadelphia. Laura’s journey from working with Serenity Soular and RE-volv, to managing a solar training vocational program for high school students for the Philadelphia Energy Authority and serving on the Board of the America Solar Energy Society is inspiring! Learn more about Laura and her work as a solar professional in the interview below.

During my freshman year at Swarthmore College, I got involved in an initiative out of Serenity House, a community center in North Philadelphia. They reached out to my Environmental Justice Professor to see if anyone wanted to get involved in a roof garden project. Serenity House is located in a low-income community of color in North Philadelphia. The neighbors were interested in having a garden in the backyard or putting a garden on the roof of the garage. I got involved helping build a butterfly garden at Serenity House and an Engineering Professor at Swarthmore agreed to come out and see if the garage could hold a garden. He said that the garage was not structurally sound enough for a rooftop garden but he had a solar panel that he offered to donate to put up on the garage instead. He then led a series of workshops on how solar panels work, which sparked interest among the neighbors to learn more about how solar energy could bring benefits to their community. Our group of Swarthmore students and neighbors then worked together to install the panel which we hooked up to a battery to power lights in the garden.

That solar installation led us to together form Serenity Soular in 2014, choosing that name to keep the “soul” in solar energy by designing projects that would benefit the community. Throughout my time at Swarthmore I was involved with Serenity Soular, helping it grow and involve more students and community members. The project was unique in that it brought together a diverse team of people working at the same table, across many differences, to bring more solar to the neighborhood.

When we were at the beginning of the journey, we learned about RE-volv and the Solar Ambassador program and it seemed like a great starting place to put solar on the roof of Serenity House, the center where we were based. We had installed solar on the garage of Serenity House but working with RE-volv allowed us to take our work to the next level. In 2015, Serenity Soular became a Solar Ambassador team, which included students from Swarthmore College and community members. I got involved with Serenity Soular in my freshman year at Swarthmore and continued working on the project through 2020. Over this time, we helped Serenity House and the Village of Arts and Humanities go solar, in addition to supporting three installations at urban gardens. 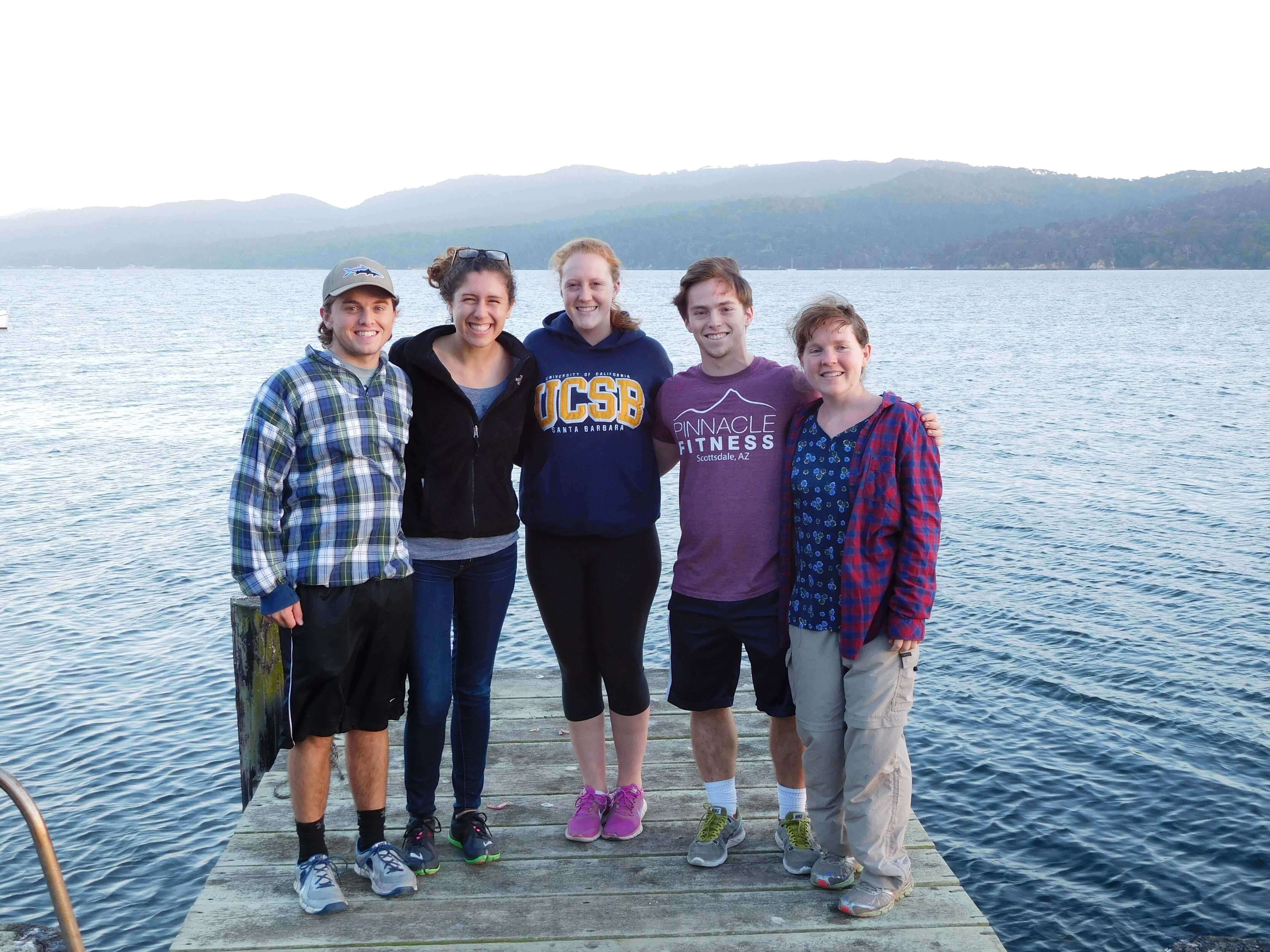 How did you involve the community in your project?

Since Serenity Soular was already a partnership of community members and students, the Serenity House community was involved in the project from the outset. One of these community members expressed concern that the installing solar on Serenity House would not directly impact their community, since Serenity House was owned by a church downtown which would see the savings. In conversation around this, we came up with the idea of doing an apprenticeship program to accompany the installation project. We ran a separate crowdfunding campaign, in which we raised money to offer stipends to young people from low-income communities of color to go to solar classes.

We invited neighborhood leaders to participate in the interviews of the applicants to the apprenticeships, which built community buy-in to the project. The stipends covered two young people from the community to go to solar classes and then shadow Solar States, the company that did the solar installation for Serenity House. Both the apprentices were hired by Solar States after the project. Last year, one of the solar apprentices, who stayed with Solar States from 2014 to 2020, started her own solar company - Soular Tech, which is the only women of color owned solar company in Philly, which is really exciting. 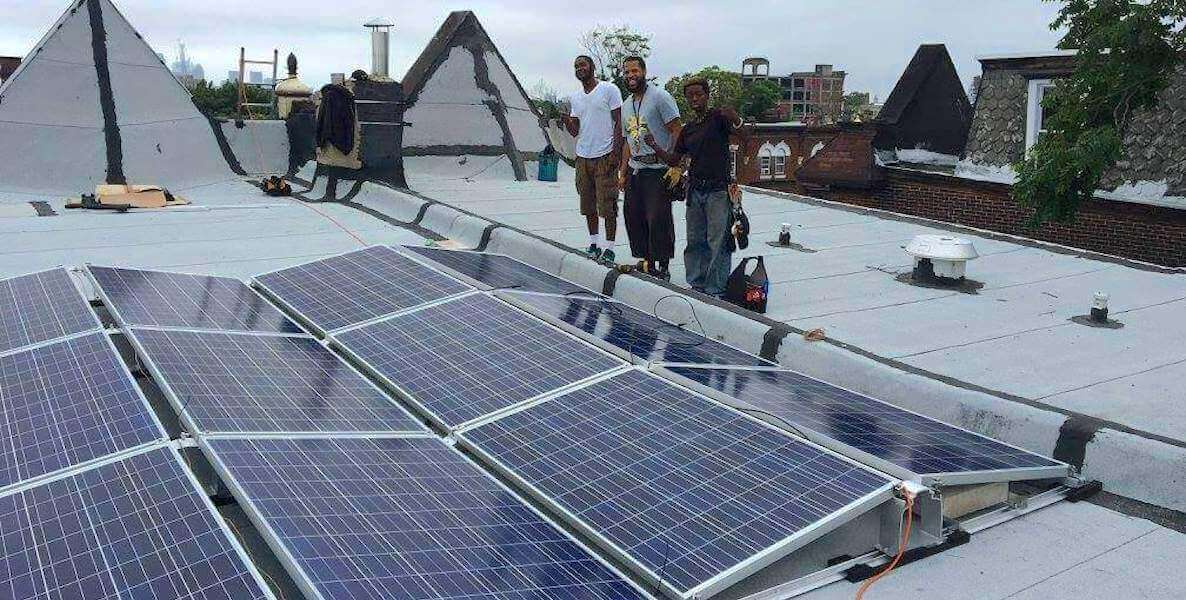 What were some skills that you learned as a Solar Ambassador that helped you in your career?

Being involved in the Solar Ambassador program provided me with a helpful baseline of how solar and solar policy works. The fundraising piece was also really valuable. It was a valuable experience to ask my network for financial support for the solar projects that we worked on. Now I have a network of people who have a history of supporting and funding me through the RE-volv projects that I can ask to help fund other projects. 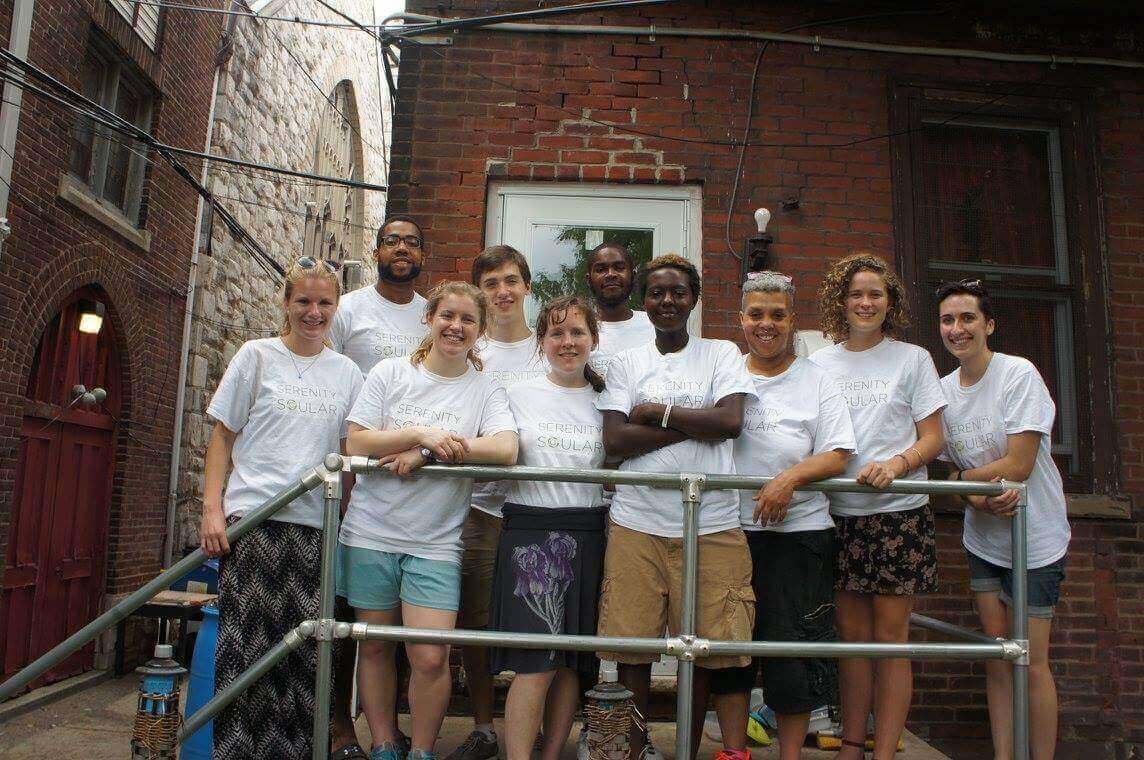 Serenity Soular at the ribbon cutting event for Serenity House

Where have you worked since graduating from Swarthmore College?

One of the community members that we worked with was always doing research on energy-related issues in Philadelphia and he came across the Philadelphia Energy Authority (PEA). We saw they were having a public board meeting, so we went to sit in on the meeting. The Philadelphia Energy Authority was just getting started at the time, having just gotten the support of Philadelphia City Council to kick off the Philadelphia Energy Campaign to create 10,000 jobs in 10 years through clean energy projects. PEA was working on driving equitable economic development through clean energy work. It was an amazing fit with the work I'd been doing with Serenity Solar. I interned there while I was doing my Masters of City Planning at the University of Pennsylvania and then I came on full time as the Solar Manager when I graduated. 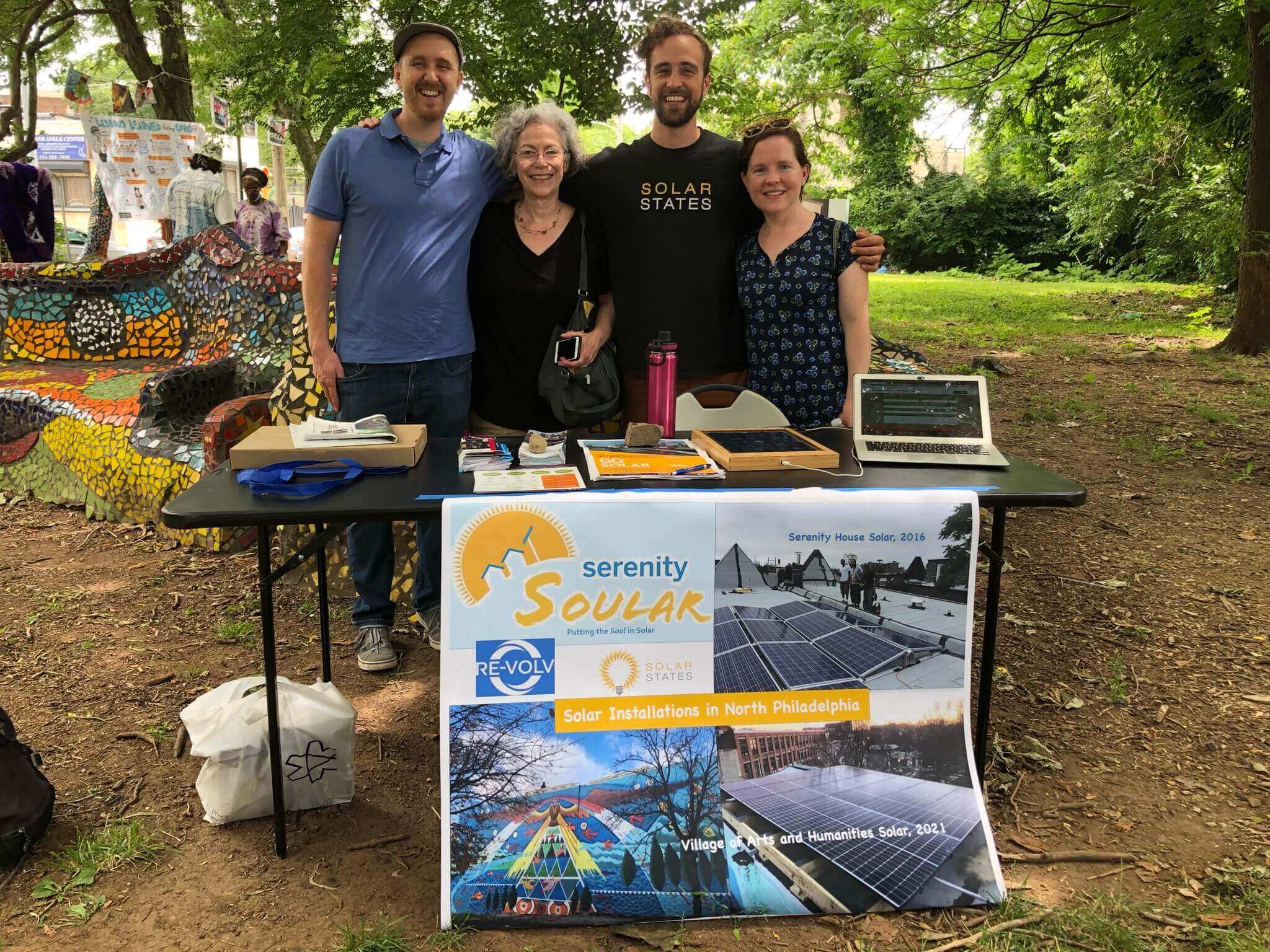 Laura with Solar States representative Jackson Kusiak, Professor Giovanna Di Chiro from Swarthmore College, and Andreas Karelas, Executive Director of RE-volv, at the Solar Ribbon Cutting event for The Village of Arts and Humanities in spring 2021

What types of projects did you work on at the Philadelphia Energy Authority?

When I came on full time at Philadelphia Energy Authority, we kicked off Solarize Philly in 2017, which was a group buying program for solar. We launched a solarized campaign and built in a fee that we collected from each installation to support low-income solar and job training. We scaled up and it became one of the largest solar campaigns in the country, with 750 people going solar through the campaign, including 50 low to moderate income (LMI) households. The program has a goal of supporting 1,000 LMI households in going solar by 2026.

In 2017, we met with the School District of Philadelphia as we were kicking off Solarize Philly, knowing that there was a demand for solar workers and wanting to offer solar training to students in high school. We made the connection and started running introductory solar classes in partnership with Solar States. In 2018 we got a $1,250,000 award from the U.S. Department of Energy to establish the program and scale it up, which is when we formed a vocational training program at a high school in Philadelphia. The program went from a 120 hour course to a 1,080 hour vocational training program. The program was designed to provide a career pathway for students who might not intend to go to college, supporting them to secure living wage jobs in the growing solar industry. We also ran a parallel program for young adults ages 18-30, which was a paid program since these individuals were out of work and school.

What has been your experience serving on the Board of the America Solar Energy Society (ASES)?

I learned about ASES through my work at the PEA. I went to a conference that they hosted in 2016 for the U.S. Department of Energy’s Solar in Your Community Challenge and from there I continued going to the conferences as a presenter over the next few years. In 2020 I learned they were recruiting Board Members and I ran for one of the open positions and was elected to serve a three-year term. In my role as a Board member, I became Chair of the Fundraising Committee. RE-volv had helped to develop my fundraising skills that I bring to this Committee. It felt like a space where I could contribute and an area where I knew ASES wanted more focus. I also Chair ASES’s Justice, Equity, Diversity, and Inclusion Committee.

What advice would you give to someone entering the solar and renewable energy industry?

Something I’ve been excited to see is how much Justice, Equity, Diversity, and Inclusion has become central to many conversations in the solar industry. In 2014 when we were doing this work with Serenity Soular it seemed like we were some of the only people in the country having those conversations around communities of color and local communities benefiting from solar. Now, thankfully, those ideas have become so mainstream and commonplace in solar conversations. I think there are a lot of opportunities there and a lot of momentum in that direction. I think it’s important to have relationships of accountability with communities that you intend to support. Having that relationship of accountability is important so that you can talk to those folks as you're designing an initiative to see if it's actually what's needed. 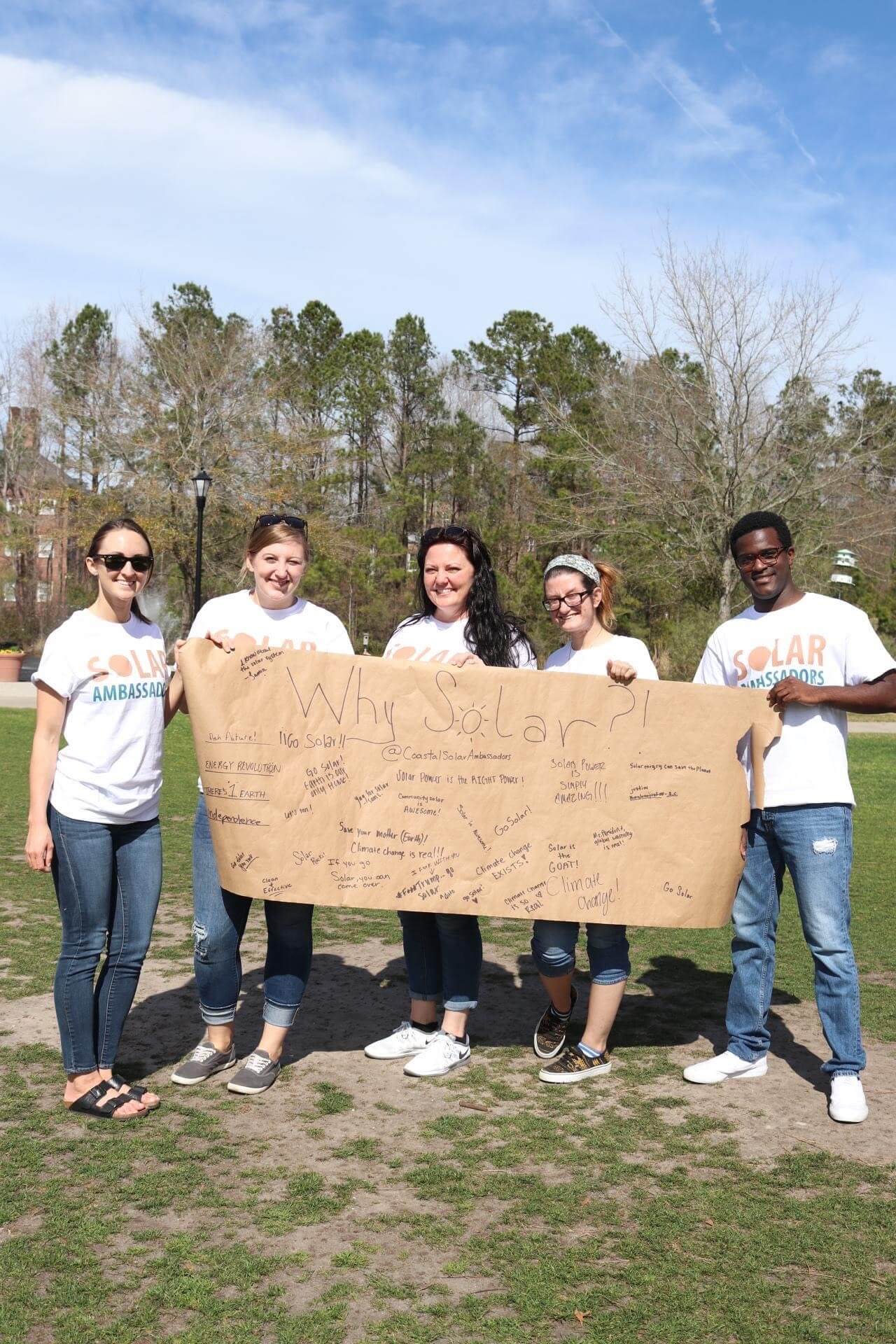 Cat Sweeney was a RE-volv Solar Ambassador at Coastal Carolina University from 2016-2018..

Tips for Teaching Children about Sustainability and Climate Change

It’s important to teach kids about sustainability because the more children who are educated..